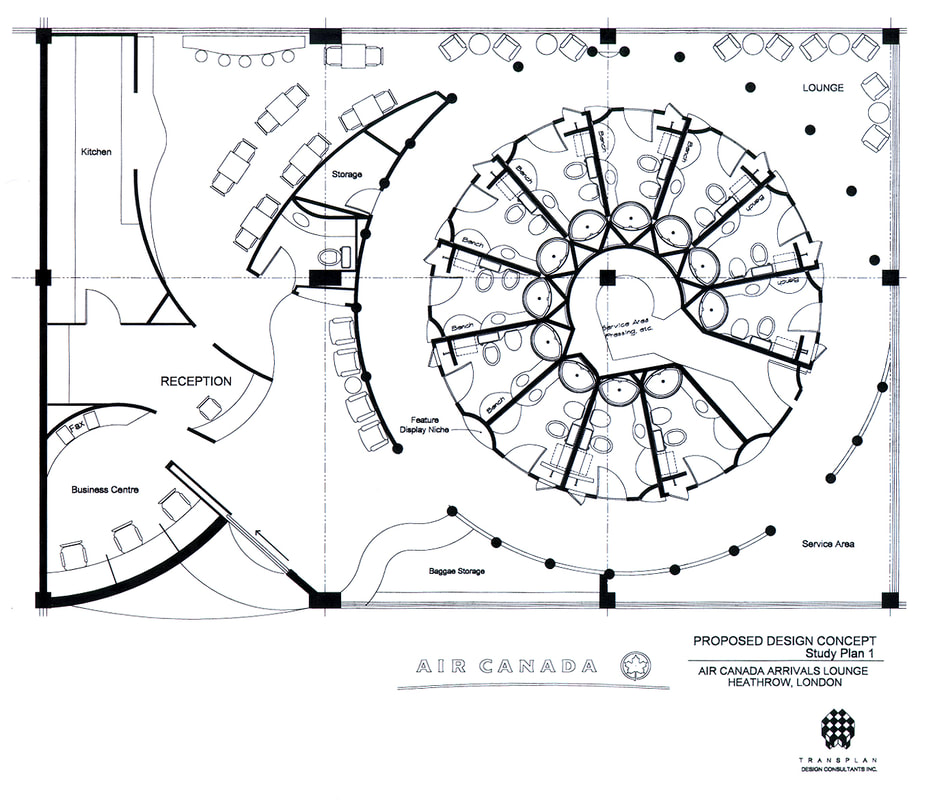 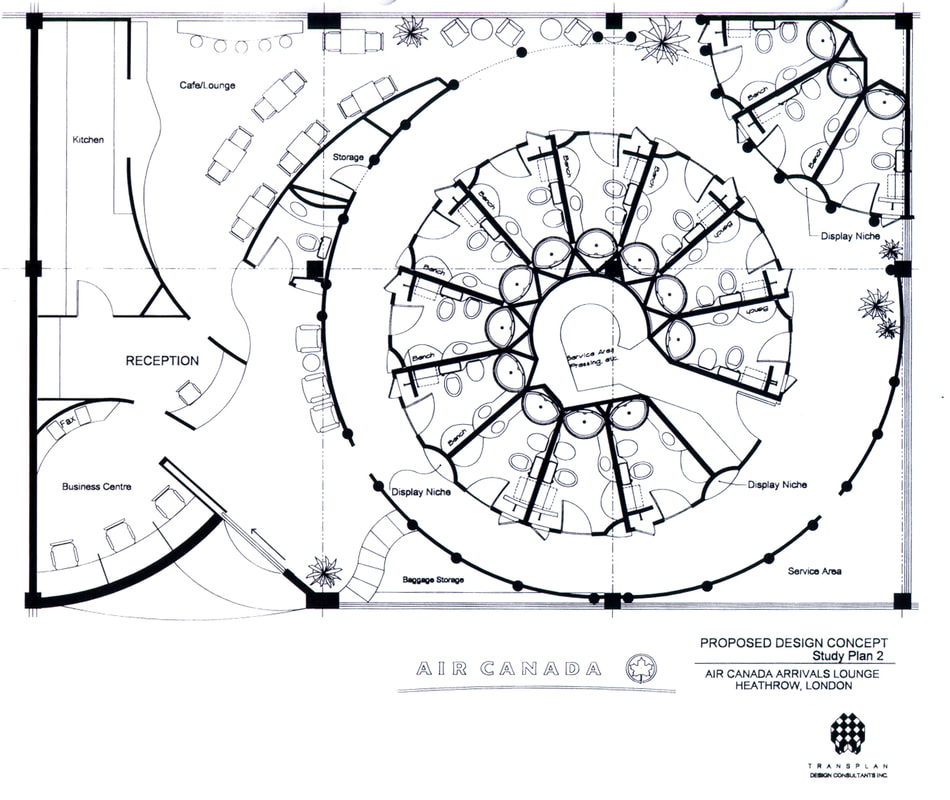 As Air Canada was a major client of my aviation design firm, Transplan Design Consultants, we provided design/project management services for numerous assignments - ticket offices, reservations centres, general admin/executive offices, and airport departure lounges such as these at Dorval, 1989. 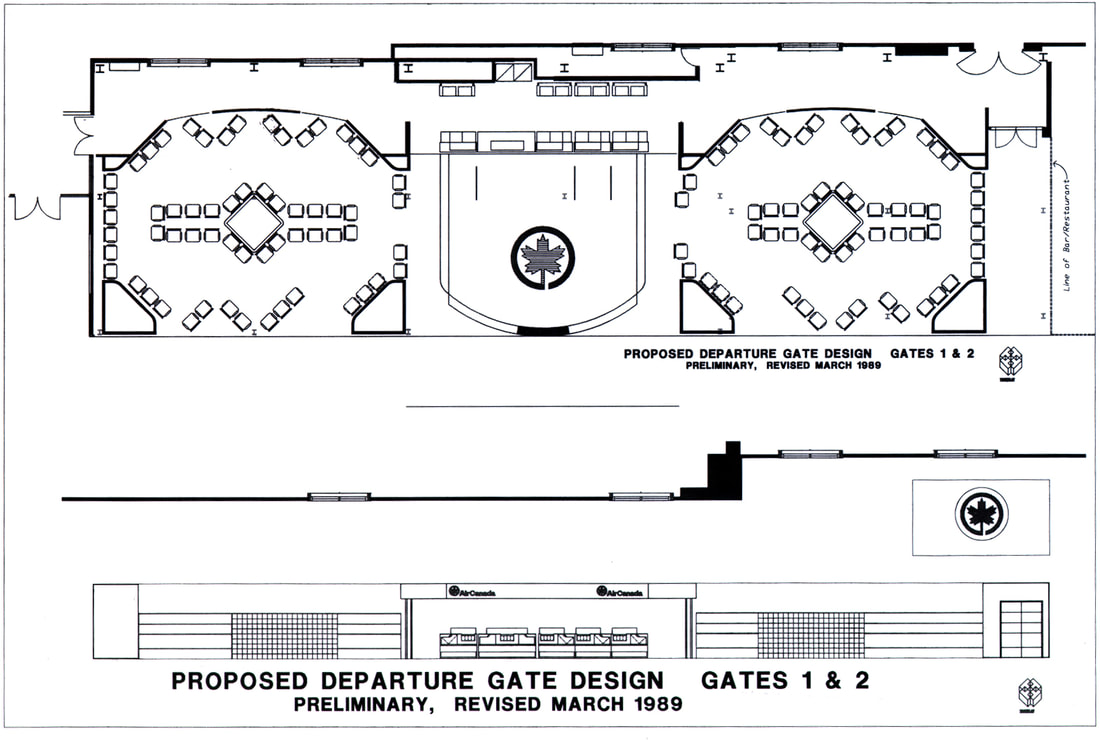 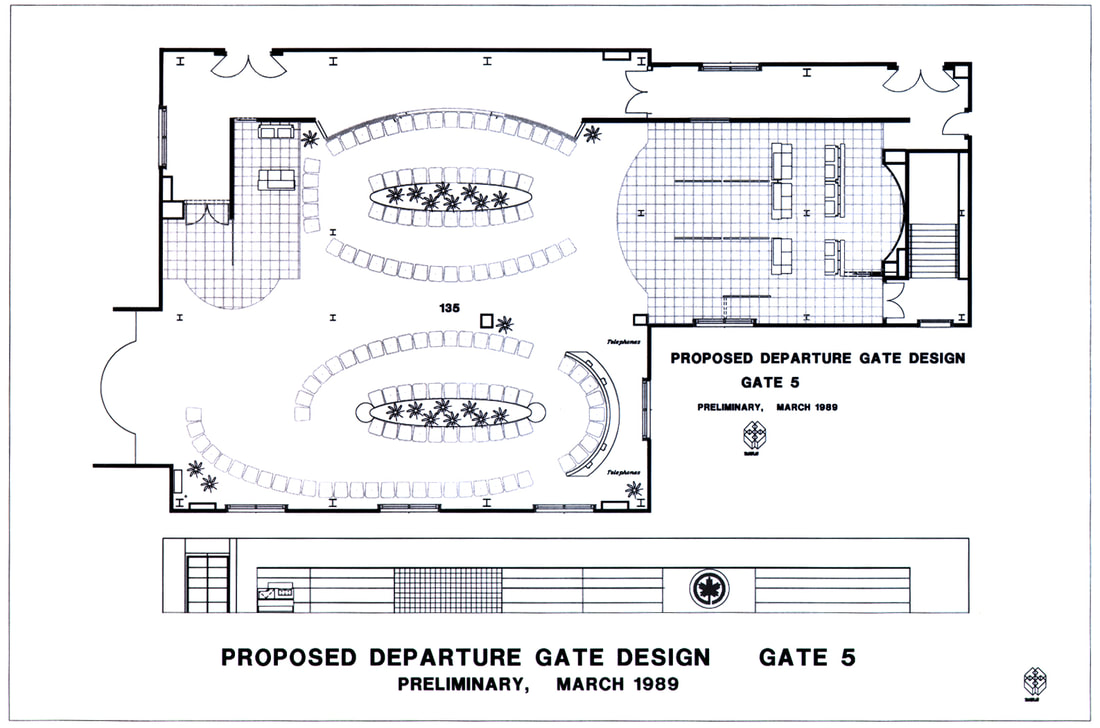 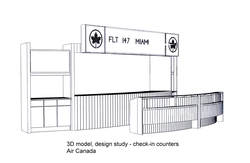 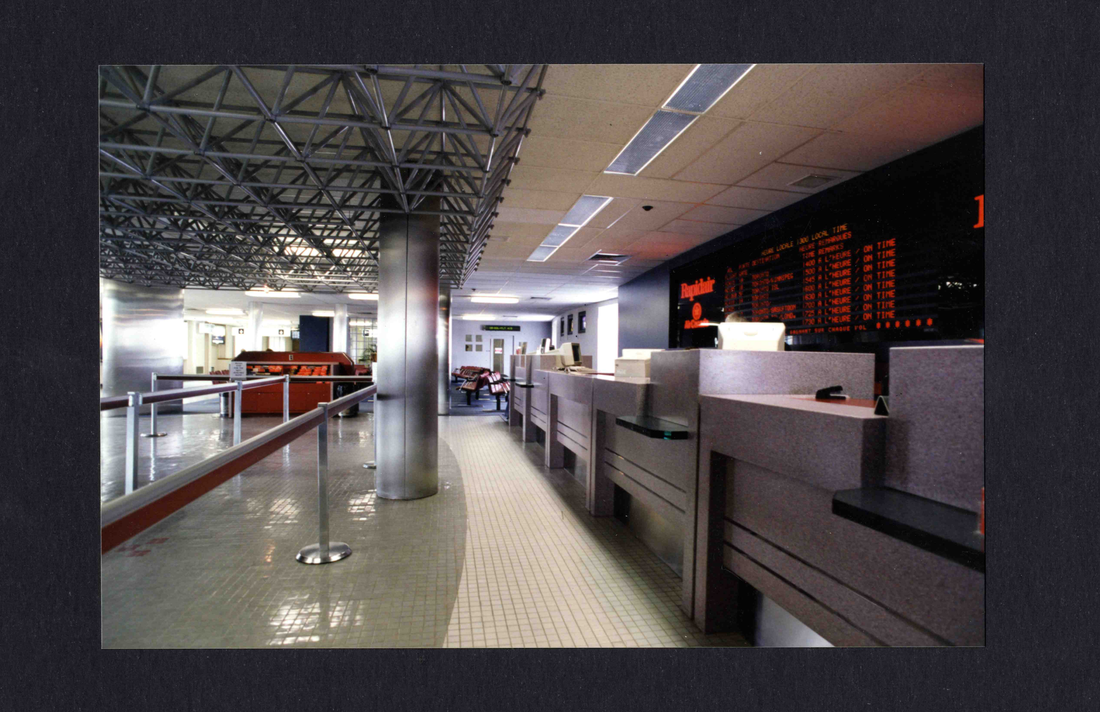 In the late 1980's Transplan Design, being the singular aviation-centric design firm in Montreal, won Canadian Airlines as a client also.
From design/implementation of the members Departure Lounge at Dorval to large-scale reservations offices, and general design work to winning a global competition to design a new and unique public ticket office. Following was the first implementation of it in Montreal. The 'flying saucer' design was propped as being super space efficient, welcoming and friendly to the public and a one-of-a-kind airlines design statement. 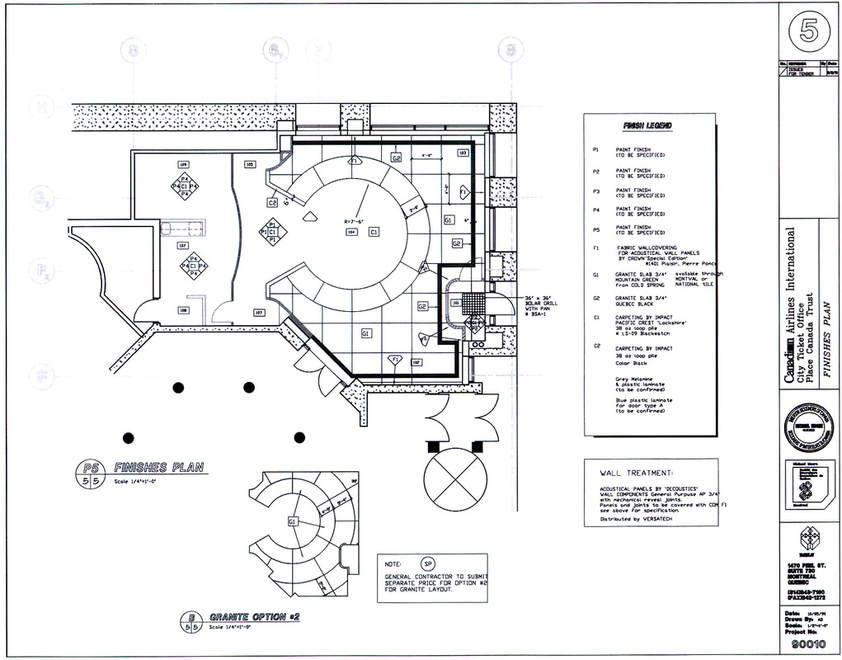 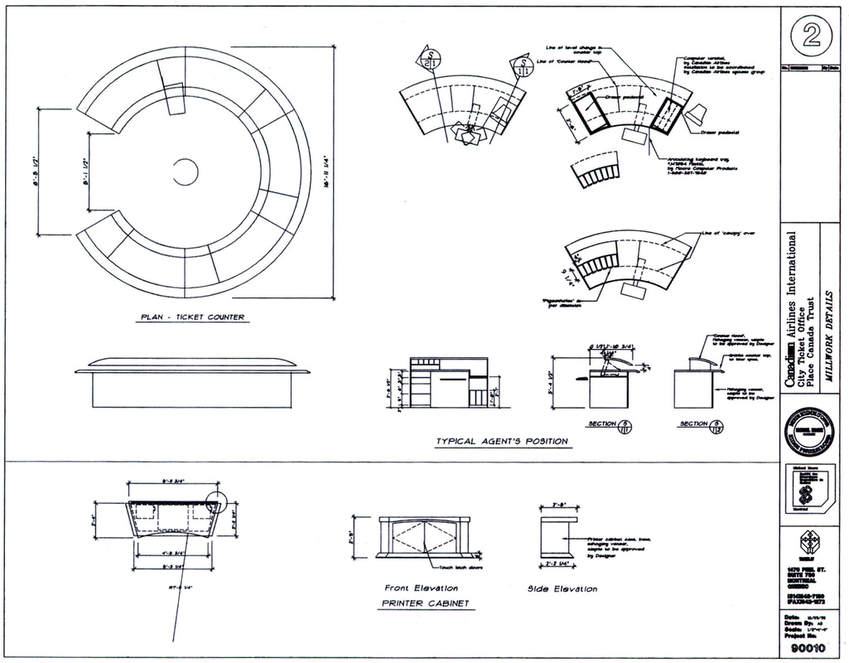 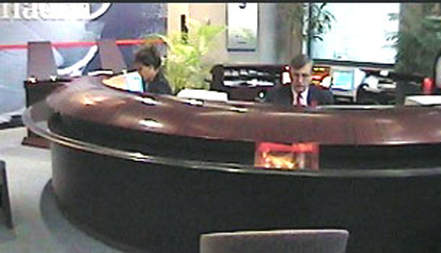 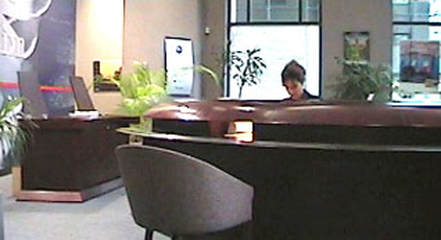 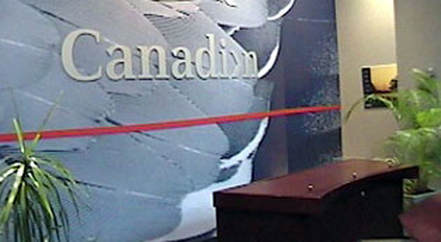 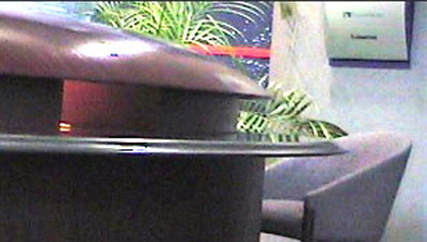 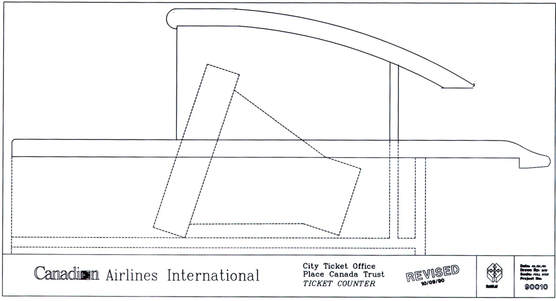 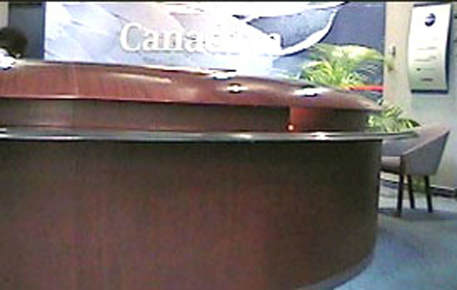 As can be seen from the details/drawings, the relationship between the agent and the customer (as shown in the section drawing) provided for both intimacy and privacy - the desk and all other ancillary cabinetwork in the space was constructed from a rich African mahogany.
Following images, files are from work prepared for American Airlines - Logan International Airport, Terminal B • Master design presentation made to AA executives on the afternoon of September 10, 2001, with meeting adjourned to continue and finalize early the next morning. The next day of course, was 9/11.
Presentation of design and concepts had been the result of 2+ years of intensive design research, study and development.
In early meetings with AA executives we were tasked with the need to develop a corridor wall system that would eliminate the costly and never-ending maintenance of service carts and equipment scarring the walls. Michael Moore devised and proposed the angled wall system as shown. Materials, although never finalized, were to be a combination of sturdy laminates and polished galvanized metal plate - a material used primarily in bridge construction as it is impervious elements or casual damage. This system was subsequently used, with approval, by JLP Architects in the sterile corridor of InternationalArrivals at Dorval. 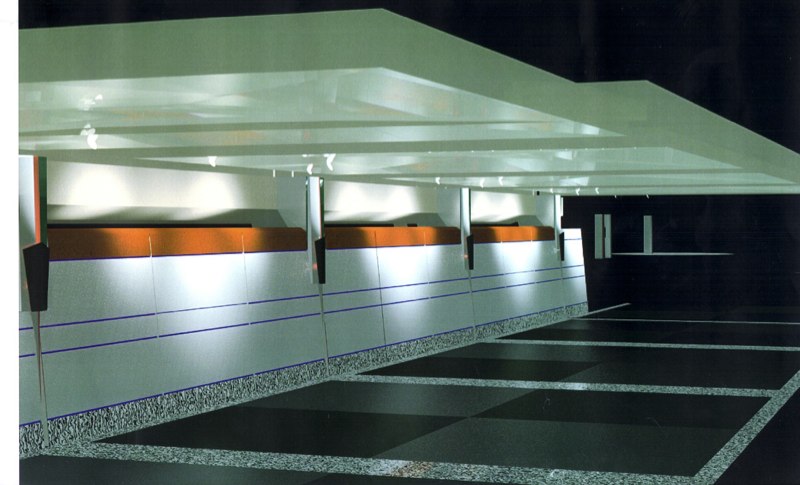 3D model created by Michael Moore to convey the look and character of this unique wall system in the
​ public corridors of the overall terminal. 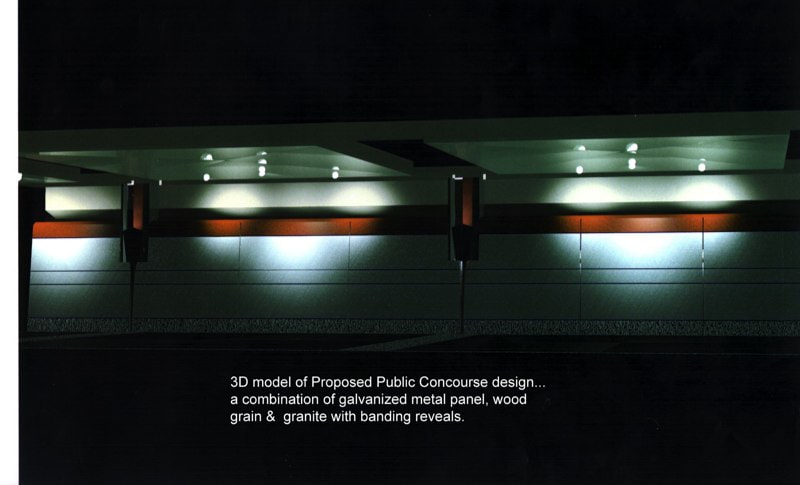 The following is the presentation set of documents - Gresham, Smith Architects (architect of record)American Airlines
was the actual client ​for our work and contribution as GSP
​had been the exclusive architectural firm for AA for decades. 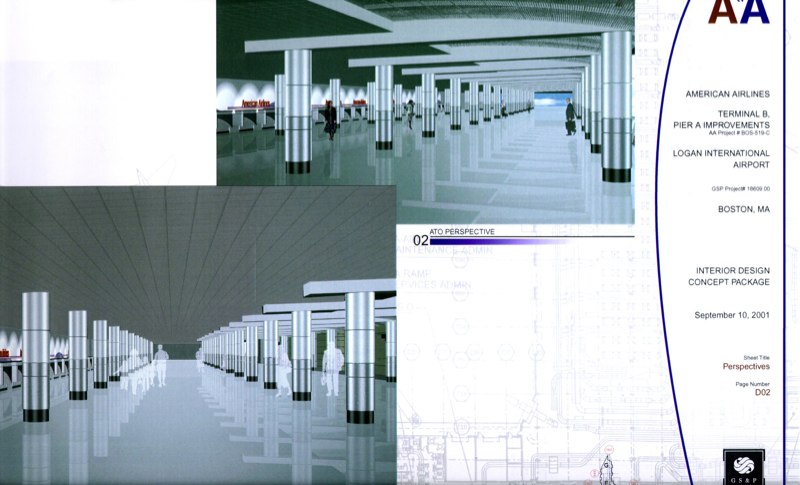 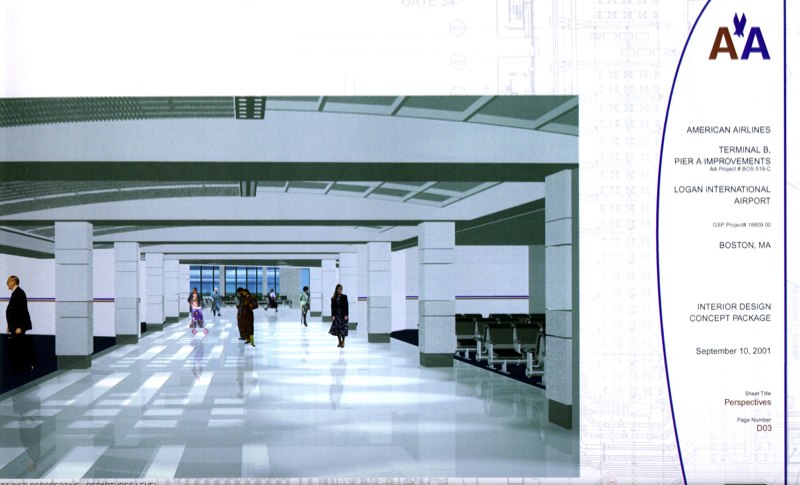 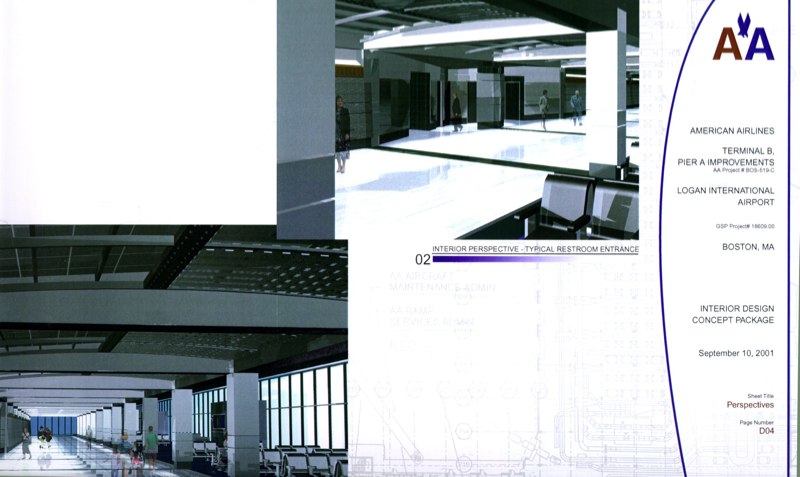 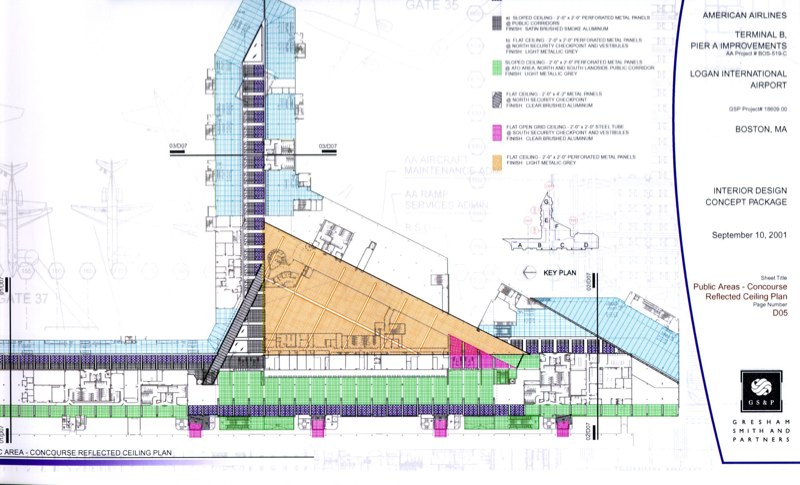 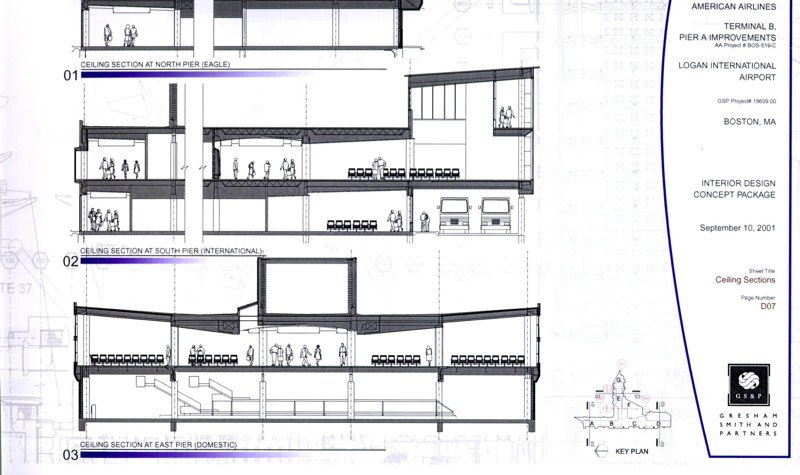 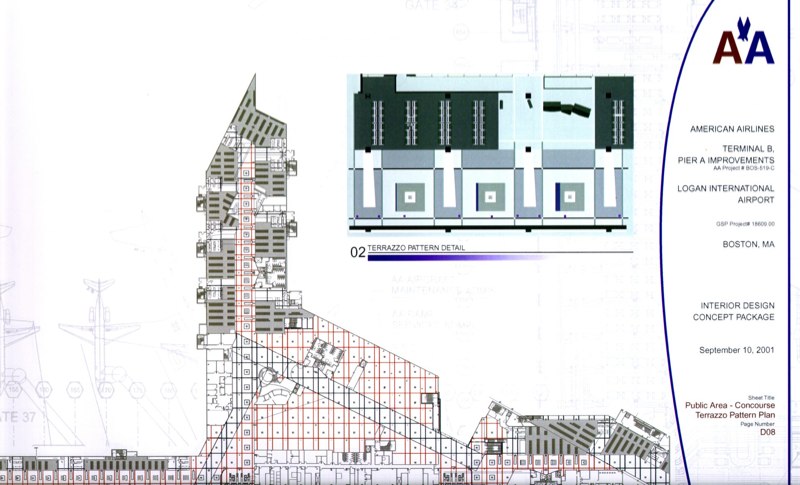 The inset graphic reflects the terrazzo pattern design developed by Michael Moore too be used as the consistent visual element throughout he 100,000 sq ft space 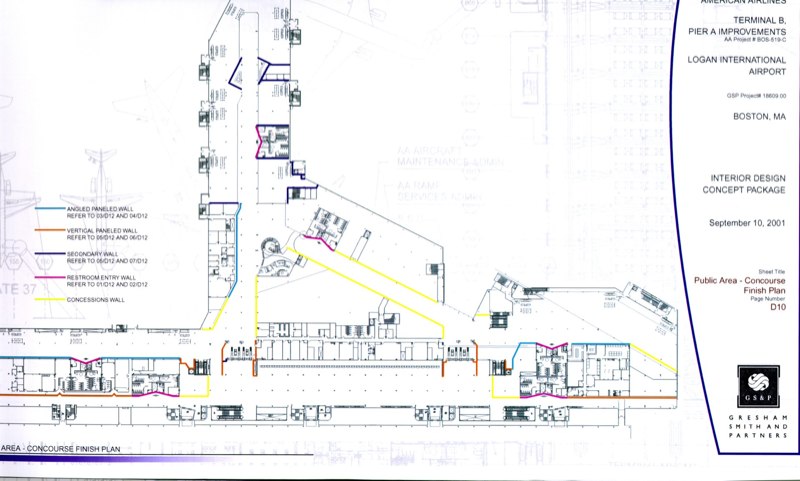 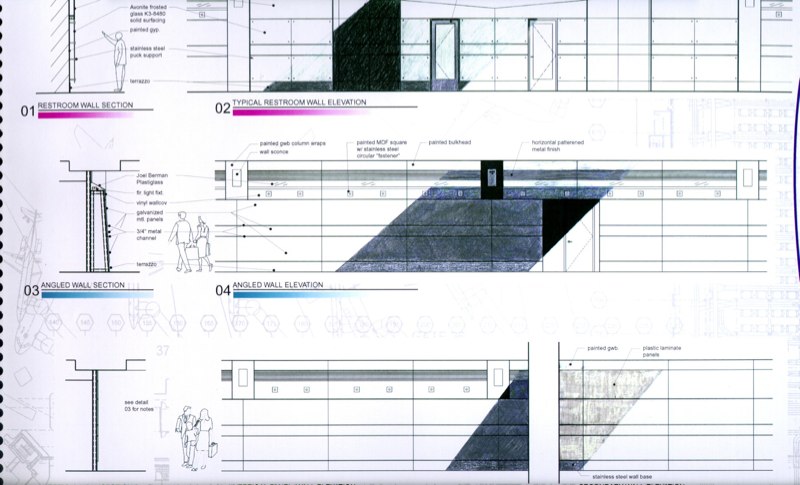 Elevations and sections show the unique design at entry points to public washrooms.
As a part of the overall design responsibility, AA was required to comply with a standard Passport policy to dedicate 5% of the project budget to the inclusion of  a public art component. Following comprehensive research Michael Moore proposed that the line drawings of Leonardo da Vinci 'Flying Machines' be incorporated into the terrazzo flooring at 6 different junctions throughout the Departures Level.